San Francisco-based art-rock band Deerhoof will at The Depot in Arcata tonight. Presented by Humboldt State Associated Students. Also: Buke and Gase (who had one of NPR’s top albums of 2010) and Raleigh Moncrief will open the show. Satomi Matsuzaki plays bass and sings, Greg Saunier plays drums, John Dieterich and Ed Rodriguez play guitars. But what is Deerhoof really? Hell if we know. Pitchfork went so far as to label Deerhoof as “the best band in the world." The New York Times described them as "one of the most original rock bands to have come along in the last decade." From their humble beginnings as an obscure San Francisco noise act, they've become one of indie music's most influential bands with their ecstatic and unruly take on pop 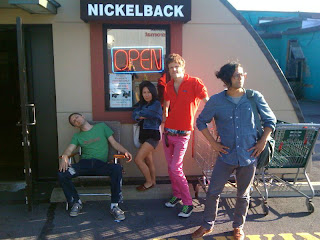 This is video of Deerhoofs first visit to Humboldt County. I shot it at the Saffire Rose (closed) in Old Town Eureka, CA on February 23, 2004
Deerhoof (YouTube)